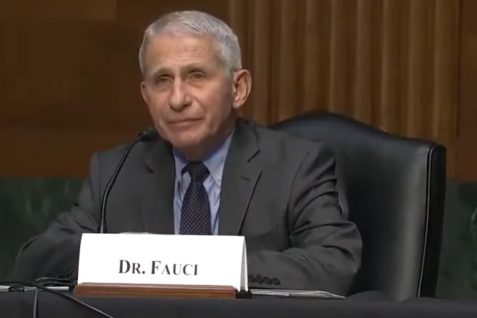 Did doctor Tony Fauci say that half of his staff have taken a Covid vaccination?

Claim On the 14th May 2021 Tony Fauci was questioned by senator Richard Burr as to how many people in his institute NIAID had taken a Covid vaccine. He said that …

On the 14th May 2021 Tony Fauci was questioned by senator Richard Burr as to how many people in his institute NIAID had taken a Covid vaccine. He said that about half of them had.

Various media outlets are claiming that he said that 50% of his staff refused the vaccine. Such as infowars: https://banned.video/watch?id=60a2dce8d666fe3137b6f297

In a video of the meeting doctor Fauci said the following:

I’m not 100 percent sure, Senator, but I think it’s probably a little bit more than half, probably around 60 percent.

60% is clearly not half, and 60% is also not a little more than half, so what is he saying and how has it been interpreted.

Doctor Fauci is selling the figures here to the senator and wants him to believe that the majority of staff in the NIAID are compliant, but he doesn’t say why the other staff have not taken the vaccine.

It is wrong of the media to claim that the staff have refused the vaccine as we do not know their circumstances, maybe they have health conditions that make taking the vaccine dangerous, or maybe they are too young/old. But they are running off of his perceived untrustworthy nature.

When doctor Fauci says “a little more than half” one could assume 51% or 52%, but 60% is a leap over and above the value of half, and is better presented as three fifths. If his statement was honest he should have started at 60%, so it appears that he’s upselling the figure and making it higher than it actually is, and this brings into question the first statement’s truth.

Did a little more than half of the staff at the NIAID take a Covid Vaccine? We will not know from this testimony, and the senator should have asked for clarification as the figure given was suspect. It is possible that less than half took a vaccine, as salesmen tend to overestimate and doctor Fauci covers himself by stating “I’m not 100 percent sure”. However for the media to turn this testimony into half of the staff refuse the vaccine is clearly wrong.

The testimony video is here: https://youtu.be/2wcpy6iLfLE?t=18

and is uploaded below: