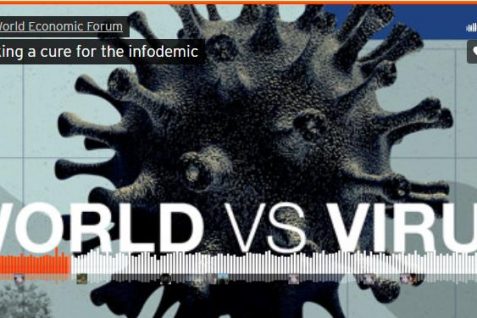 Did the WEF Announce The Recruitment Of ‘Information Warriors’ To Control Narrative On Social Media?

Claim A recent article from news punch on the 17th August 2022 reported that the WEF had announced the recruitment of hundreds of thousands of “information warriors” to control the internet. …

A recent article from news punch on the 17th August 2022 reported that the WEF had announced the recruitment of hundreds of thousands of “information warriors” to control the internet.

Did the World Economic Forum (WEF) announce the recruitment of “information warriors” to control the narrative on social media? No, that’s not true: The WEF has recruited no such people.

So despite the weird timing of this source podcast popping up for media scrutiny nearly 2 years after it was published on Nov 26, 2020, the facts of this story are correct and Lead Stories is playing with semantics rather than reporting faithfully.

The WEF website published a podcast featuring Melissa Flemming along with the article called:

“There’s no vaccine for the infodemic – so how can we combat the virus of misinformation?”

It can be found here with the podcast embedded in it through soundcloud. This conclusively proves that the WEF did announce the recruitment activity.

Melissa’s words have been changed by News Punch from Information volunteers to Information Warriors by the writers using a technique common to many world media outlets, that of changing a slightly obscure term into one that is more widely used and understood, by putting it in quotes to denote that it is not the original term.

Here is an example from the BBC news site today where they put quotes around the term ‘hunger stones’:

News Punch also say that these recruited people will control the narrative on social media. While this is not directly stated by the WEF article, again we understand that when it is written “ask them to serve as kind of ‘digital first responders’ in those spaces where misinformation travels” this is an equivalent statement, and is again a common technique used by the media in general.

So Did the World Economic Forum (WEF) announce the recruitment of “information warriors” to control the narrative on social media?

Yes, they did. It was an article the WEF published on their website. There is a small error in the News Punch article that it was the WEF who recruited the people, however we know that the WEF and the UN recently signed a Strategic Partnership Framework in June 2019 because the WEF also published that as an article.

So is it a real stretch to think the two organisations work together on the topic of “the consultation, exchange of information and coordination required for effective collaboration”? which is a direct quote from the UN/WEF framework document.

The only odd thing about this WEF article is why is it being brought up now as an issue, two years later? What the significance of August 2022 is in relation to information warriors is not yet known, but watch this space!